High temperature geothermal resources, usually above 300°F (149°C), are accessed by drilling production wells. From the wells, the steam or hot water is brought to the surface and piped to a geothermal power plant where its energy is used by a steam turbine to generate electricity. After the geothermal water does its work in the power plant, it is piped back into the geothermal reservoir – and the cycle continues. Geothermal power plants operate 24 hours a day, since the “fuel” source is always available; these plants are therefore valued for their ability to provide us with baseload electricity. Around the world there are about 11,000 MW of geothermal electricity generated in 22 countries. Current U.S. geothermal electric power generation totals approximately 2200 MW (or about the same as four large nuclear power plants). California’s geothermal power plants have a dependable installed capacity of over 1,800 megawatts – producing about 5 percent of California’s total electricity (more than all other renewables combined, excluding large hydro). It is estimated by the U.S. Geological Survey that California is likely to have more than 10,000 megawatts of untapped geothermal resources, using current technologies. There are two primary types of geothermal resources that are used for power production: dry steam and hydrothermal. A third type of power production technology is under development throughout the world – this is called Enhanced Geothermal Systems (EGS). Dry steam resources exist where the reservoir is at pressures and temperatures that super-heat the water in the rock so that it has literally completely boiled. The resulting steam is trapped by an impervious “cap” rock, resulting in a very hot steam system in which no liquid water exists. These reservoirs are the easiest to exploit for power production because the very hot steam is tapped by drilling through the cap rock, and the production wells then directly pipe the steam to power generating turbines. Hydrothermal reservoirs are geological systems in which very hot liquid water, rather than steam, makes up the reservoir. These systems are usually recharged continuously with rainwater. Power is generated in these systems by drilling production wells into the zone of hot water, and allowing the hot water to flash to steam as it ascends from depth. Geothermal power plants use two basic methods to extract energy, flash plants and binary plants. To learn more about each type, click the tabs below.

Geothermal resources that are less than 150 – 180 degrees Celsius are considered low-temperature resources, but can often still be utilized for geothermal power production.  By using a high efficiency heat exchanger, the heat from a geothermal fluid is transferred to a ‘working fluid’ that has a lower boiling point.  This heating process vaporizes the working fluid and the resulting vapor is used to power a turbine using the thermodynamics of an expansion cycle.  Thus, the basic concepts that apply in a binary electrical generating facility for powering the turbine are very similar to that in a steam turbine.

One commonly used working fluid is isopentane that has a boiling point of 28 degrees Celsius.  By using fluids such as isopentane, geothermal resources with moderate temperatures are capable of producing large amounts electricity with most binary plants ranging from 2MW to more than 50MW

Most geothermal systems currently producing power are called hydrothermal systems. They are characterized by the presence of very hot water in the geothermal reservoir. Because these fluids are thousands of feet underground, they are subject to very high pressures. As these fluids ascend from depth to the generating plant, they will flash to steam.  To imagine how this might occur, think about a can of soda.  When sealed, the soda is under pressure and not yet bubbly.  When you open the can the pressure is released and the gases that are dissolved in the liquid bubble out.  Tapping the geothermal reservoir is analogous to opening a can of soda – as the water starts ascending the bore hole the liquid water flashes to steam as it expands with decreased pressure.  This steam is then used to run a turbine and make electricity. 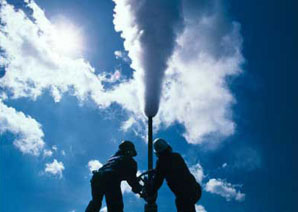 Although all flash plants use basically the same technology, different designs are used to assure that the efficiency of the energy extraction process is maximized. The basic types of flash plants are single-flash and dual-flash.  Flash plants have a flash (expansion) tank to ensure that the flashing process is as complete as possible. This design keeps the pressure that drives the turbine in the generator as high as possible. Single-flash plants are essentially a single cycle process in which the flashed steam drives the turbine, the pressure drop across the turbine is kept as large as possible, and the spent steam (i.e., condensate) is then collected and re-injected. Dry steam plants, which are discussed here, commonly utilize a generating system that is similar to the single flash plant. The primary difference between these systems, as you can see in the pictures below, is that dry steam systems do not have a flash (expansion) tank as the resource comes in as a forceful & dry (unsaturated) steam. The single flash plant however does. Dual-flash plants differ from single-flash plants in that they capture the earliest and hottest spent steam (i.e., condensate) and then allow it to flash in a different part of the generator. This process allows extra energy to be extracted from the steam/condensate that would otherwise have been lost. Dual-flash systems require a series of turbines specifically designed to operate within relatively narrow pressure and temperature intervals, and they are highly efficient. Whether one uses single- or dual-flash plants depends upon the temperature of the resource and other characteristics of the reservoir and local conditions.